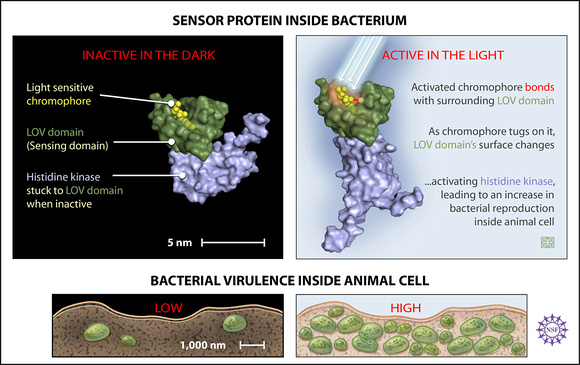 Researchers have found light-sensitive protein complexes inside certain bacteria. The complex they studied is made up of a sensing domain, abbreviated as "LOV," sitting on top of an enzyme called a "histidine kinase." The light-sensitive component, called the "chromophore," sits inside the LOV domain. When the bacterium is inside its host's cell and light strikes it, the chromophore bonds with the surrounding "cage" of the LOV domain. As the chromophore tugs on it, the LOV domain's surface changes. This possibly brings about a conformation change activating the histidine kinase below. As the histidine kinase activates, bacterial reproduction inside the host's cell increases significantly. It is postulated that the light sensitive complex is a mechanism of survival for the bacterium when besieged by the host's disease-fighting cells.

Accolades:
“I'm not the only one who thinks the image is great! See the note from Argentina.”

“The image is just wonderful!!”

“Extraordinary skill, and mastery of color!”