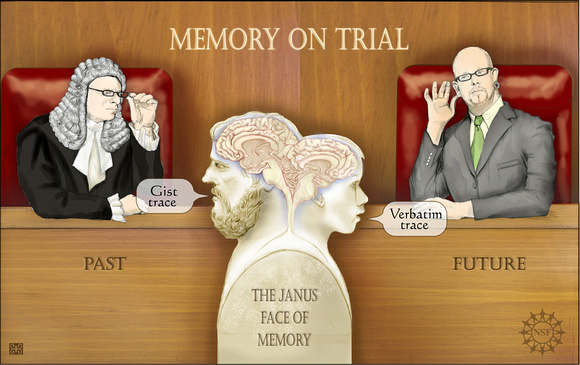 Scientists found that humans exhibit two types of memory. They call one "verbatim trace," in which events are recorded very precisely and factually. Children have more "verbatim trace," but as they mature, they develop more and more of a second type of memory: "gist trace," in which they recall the meaning of an event, its emotional flavor, but not precise facts. Gist trace is the most common cause of false memories, occurring most often in adults. Research shows that children are less likely to produce false memories, because gist trace develops slowly. As a result, children's recollections could be more reliable than those of adults, and this could lead to ramifications in the courtroom. This illustration shows the Roman two-faced god, Janus, on trial. Symbolically, his bearded, mature head speaks to judges of yore, while the young boy's head is turned towards the judge of the future.