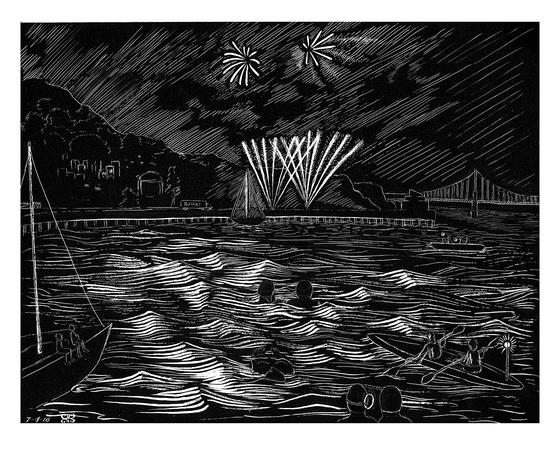 July 4th, 2010 was probably my favorite firework viewing ever.
You know how some sensory experiences just stay with you? - for better of worst.
Like I'll never forget what holding our first cadaver's brain felt like at medical art school.

Well - the 4th was one of the "for better" varieties; but still a challenge.
Fireworks were being shot off Muni Pier. They were deployed from 3/4 from the left of the picture (right under the paint bucket on the Golden Gate Bridge).

It was a clear day up until 6pm when fog rolled in as per SF tradition (hardly ever a clear 4th). It stayed light late. But then cerulean was quickly succeeded by dark blue and blackness that seemed to drop directly out of the sky.

A group of us got ready to get in the water. I got antsy and ran in. (I was getting colder standing in the wind outside). The water was nice for a moving pace; and I found a couple of pockets of warmer water next to the dock so I could keep an eye out for the swimmers before their jumps. We all wore glow sticks; some had glow necklaces; some - bracelets. Cap & goggles.

About 15 police officers in uniform had been at the club's party all day long for safety. [The South End club is a great SF institution that harbors folks from all walks of life - including a number of lifetime policepeople]. Apparently the guys on duty were very well fed for the whole time. (Al and I got there only in the evening for the main spectacle). The friendly eyes of the law turned away in unison as we swimmers got in, a few folks glided in on surfboards and kayaks illuminated with regulation torches started off. We made our collective way into the silver/black middle of the cove.

Then the display went off. I like fireworks a great deal. These were beautiful (but not totally out of the ordinary as far as pyrotechnics go).

Being in the water on our backs, checking out the night sky; each swimmer in a mini-world of his/her own - yachts around us... reflections, fog, light; dark; silver; cold creeping in... that was not ordinary at all.

Quite extraordinary. A complete 360 immersion experience --> a perfect sphere; with the night and water and salt and temperature reminding each one of us "hey this is life. Hey this is the life."

Warming up in the sauna after the deep immersion firework part wasn't too bad either.
© Zina Deretsky
Powered by ZENFOLIO User Agreement
Cancel
Continue